Nakhon Si Thammarat have the most wonderful coastline that you can view while going to Ko Samui. Pink Dolphins is also a frequent visitor at the emerald sea and only few saw and documented them. Sanctuary for Buddhist monks is an opportunity for foreigners to offer alms before your boat tour to Had Khanom National Marine Park.

The city of Nakhon Si Thammarat is a place where ancient civilization and religious tradition combine as one with a largely unspoiled natural landscape. Situated on the lower Gulf of Thailand at the site of an ancient trade route and city state, the province adjoins Trang , a gastronomic paradise and another hidden gem, making any trip to the area a journey of pure indulgence.

Nakhon Si Thammarat ‘s top attraction is Wat Phra Mahathat Woramahawihan on Ratchadamnoen Road, a royal temple of the first class and one ofThailand’s most important historical sites. The temple’s pagoda, built in Sri Lankan style, is 55.78 meters high with a top entirely covered by pure gold. Inside the temple are a number of important edifices, most notably the Ayutthaya-period royal building and the Sam Chom building housing a Buddha image attired in royal clothing . The temple is open daily from 08:30 am to 4:00 pm and admission is free.

Another well-known temple in Chang Klang district west of town is Wat That Noi,
site of a large reclining Buddha as well as memorials to Porthan Klai, founder of the temple and a well known monk of the last century. Whatever Porthan Klai said always seemed to come true, so to prevent his portents from happening he maintained a vow of silence, not saying a word for many years. He died in 1970 at the age of 94. The monk’s remains are housed at the temple along with a life-like wax figure and several statues in his memory.

For another dose of southern culture, head to Suchart Subsin’s Shadow Puppet House on Si Thammasok Road, Soi 3. The owner, Suchart Subsin, is one of the country’s best-known shadow puppet masters and among the finest puppet craftsmen in Thailand. The house includes a shadow play museum, shadow play demonstrations and a theatre for live performances. Visitors can appreciate this fascinating art every day from 8 am to 5 pm (+66-7534-6394).

The village of Ban Khiri Wong in Lan Saka district, about 29 km from the provincial seat , has suffered numerous natural disasters in the past and has come to terms with its losses by working closely with nature rather than against it. Today the award-winning village is a nationally recognized sustainable community, with local people living and working in harmony with the landscape . Tourists can witness ways of life based on traditional methods of mixed fruit cultivation and enjoy the bountiful local produce. Nearby is southern Thailand ‘s highest peak, the 1,835-metre Khao Luang and the Khao Luang National Park, which is popular for trekking to see the resident flora and fauna. Trekking trips can be organized from Ban Khiri Wong (+66-7553-3113 or +66-7553-3370).

Nakhon Si Thammarat has countless waterfalls, but one of the most famous and beautiful is Krung Ching Waterfall in Khao Luang National Park, Nopphitam district. Named after Ton Ching, a kind of palm, the waterfall splits into several levels but the most breathtaking is Nan Fon Saen Ha where water cascades for over a hundred meters , cloaking the area in mist. The waterfall can be reached by an easy 3.8-km trail through the forest , which is also an excellent site for bird watching . Accommodations and a camp site are available (+66-7546-0463, +66-7530-0494).

Another hidden gem in Nakhon Si Thammarat is the Pak Phanang River basin, the
site of a several royal development projects of His Majesty the King that have brought life back to this once degraded area. The local municipality of Pak Phanang organizes cruise trips along the river for tourists to experience local ways of life and see Pak Phanang’s royal projects, bird’s nest houses (Ban Rang Nok), and the mangrove forests. The basic cruise takes about two hours but can be extended for those wishing to take it slowly (+66-7551-7058) . The nearby pine lined beach of Pak Phanang and the crescent­ shaped Talumphuk Cape jutting out into the Gulf of Thailand are also well worth a special trip to see the mangrove forests and local fauna.

Pink dolphins
The peaceful district of Khanom to the north of the province is the site of gorgeous beaches and lush forested mountains but many people visit the area for the chance to see its delightful dolphins – pink dolphins! It’s easiest to see the dolphins with a licensed long-tailed boat tour, setting out from the fishing village of Klong Bang Paeng in the early morning and passing through the Hat Khanom-Mu Ko Thale Tai National Park with its sea grass areas and mangroves. The fun-loving mammals, actually Inda-Pacific Humpback dolphins (Sousa chinensis), will often jump out of the water and take fish presented by the villagers but you have to be quick getting photos . Also of interest in the area are Koh Nui, with its freshwater spring, and the unusual Pancake Rocks of Lak Sor Bay. 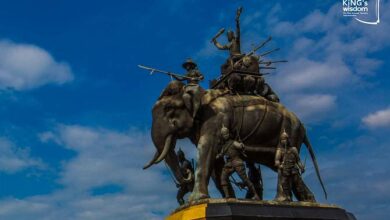