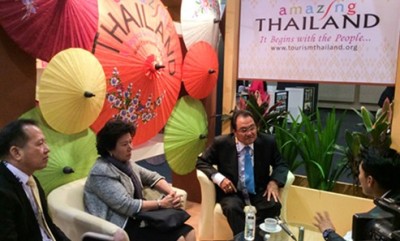 Bangkok (Thailand) – January 27, 2015 – The new national tourism-promotion campaign “2015 Discover Thainess” will be unveiled for the ASEAN countries when the Tourism Authority of Thailand (TAT) participates in the largest regional travel and tourism event, the ASEAN Tourism Forum (ATF) 2015, between 22-29 January, 2015, in Nay Pyi Taw, Myanmar.

The launch will be particularly important as the ASEAN countries are expected to be among the top sources of visitor arrivals in 2015, when the integrated ASEAN Economic Community (AEC) will take effect and improved infrastructure upgrades will strengthen the transportation networks between Thailand and its border-crossing neighbours: Malaysia, Myanmar, Lao PDR. and Cambodia.

The “2015 Discover Thainess” campaign will emphasise the priceless treasures of Thailand, which gives Thainess its charm, makes the Thais unique as a people, society and culture, and underpins the kingdom’s tourism competitive advantage. The marketing messages will highlight the concept of Creative Tourism under which tourists can experience the Thai way of life, Thai culture and hands-on Thai activities; such as, Thai boxing, Thai massage, Thai cooking, and Thai classical dance.

This year, as part of the “2015 Discover Thainess” campaign, TAT is recommending 12 hidden gems – emerging new provincial destinations that ASEAN tourists should not miss, especially repeat travellers. All these places are renowned for their unique history, culture and lifestyle. For example:

Northeast: Buriram and Loei – Loei is close to the border with Thailand’s neighbour, Lao PDR., while Buriram is on the border with Cambodia. Visitors can now drive across both borders.

North: Phetchabun, Lampang, and Nan: These provinces are important stopovers on the route to Chiang Mai in North Thailand.

East: Chanthaburi and Trat: These are also emerging provinces close to the border with Cambodia. Visitors can now drive across the border to Cambodia.

Central: Samut Songkhram and Ratchaburi: These are culturally-rich provinces on the route to the popular seaside resort of Cha-am/Hua Hin.

In addition, TAT has allocated specific “Happiness” activity themes for each month of this year, as follows: The Golden Kinship Celebration in February and the Muay Thai Festival in March. The full list of festivals is available here:

At the ATF, Thailand’s tourism industry representatives will participate in various meetings; such as, those of the ASEAN NTOs, ASEAN Tourism Ministers, ASEAN+3, ASEAN+India, ASEAN+Russia between 22-26 January, 2015. At the TRAVEX, Thailand is represented by 86 exhibitors, the second largest contingent after host country Myanmar. A “Thai Night” will also be organised at the Grand Amara Hotel.

In 2014, Thailand welcomed 24.77 million international visitors. Of this number, 6.6 million arrivals were from ASEAN or 26.72% of the total market share.

Tourism Authority of Thailand Governor Thawatchai Arunyik said, “We believe intra-regional travel will be one of the primary growth areas after the ASEAN Economic Community takes effect. It will open up many opportunities to build upon Thailand’s geographical advantage at the heart of the 10-member community.”
ATF 2014_01

He noted that all the ASEAN countries are committed to build closer intra-regional social and economic cohesion. “It will also allow us to tap the potential of the many long holiday weekends to attract short-stay but high-spending traffic from the neighbouring countries, which are all within three to four hours flying time of each other.”

In addition to the strong aviation linkages in ASEAN region, much investment has gone into enhancing road connectivity; such as, the Asian Highway network. Once this cross-border infrastructure is complete over the next two or three years, the potential for bilateral and intra-regional travel is limitless, he said.

The ASEAN Tourism Forum (ATF) is a cooperative regional effort to promote the Association of Southeast Asian Nations region as one tourist destination where Asian hospitality and cultural diversity are at its best. This annual event involves all tourism industry sectors of the 10 member nations of ASEAN: Brunei Darussalam, Cambodia, Indonesia, Lao PDR., Malaysia, Myanmar, Philippines, Singapore, Thailand and Vietnam.

Each year, the hosting of ATF is rotated among the member countries. ATF 2015 marks the 34th anniversary of this event since its inauguration in Malaysia in 1981. This year, Myanmar is hosting it for the first time.