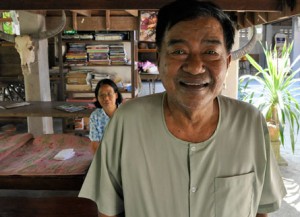 Nakhon Si Thammarat is well known for its shadow puppetry called nang thalung. The puppets are cut from buffalo hide and then they are carved into intricate characters that come from Thai drama stories. The shows are becoming increasingly rare, but puppet master Suchart Subsin has been working overtime to help keep the ancient folk art alive.

Suchart has made Nakhon Si Thammarat one of the centres or puppeteering, and as such, it is becoming popular destination for both foreign and domestic tourists.

The shadow puppets have evolved from something simple to something with full detail and colour. They are used as forms of entertainment reflecting modem times, as well full of humour and life. The puppets are very popular at festival celebrations, and birthdays. The performance of the shadow puppet goes back long ago and into many countries including Egypt, Turkey, Greece, Indonesia, Malaysia and Thailand. The history of puppetry is based on Hinduism. Performances of the shadow puppet are very entertaining and quite enjoyable. 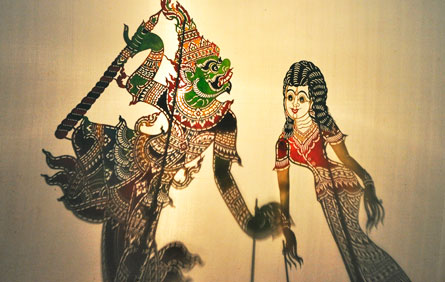 There are various characters each with a distinctive silhouette that always uses comedy. During the show, the puppets are placed behind a white curtain with a light shining from behind, creating a beautiful silhouette. The puppet master himself is the only one telling the story while moving the puppets, thus needing to use a variety of voices and needing a good talent in story telling. During the show, drums, gongs, and symbols are used to help in the telling of the play.

Making the shadow puppets is a lengthy process which takes a lot of talent. A treated cows hide is dried for three days on a frame. When the leather is set a design is drawn on the leather. Designs can vary from characters, or animals used for decorating homes. The design is carved out using small hand instruments. Carving the learher takes patience, talent, and a lot time. Carving can take hours or months depending on the details of the design. 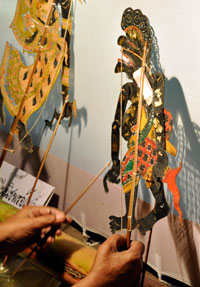 The hide is then painted using black, green, red and yellow colour. Bamboo rods are attached to the puppets to manipulate the movements of the characters. The puppets are the sold at various markets and festivals, and are used in performances or to decorate homes. They make great souvenirs.

Mr. Subsin wants to keep the history alive at his home where there are many shadow puppets from around the world dating back 200 years as well as more recent ones. He shows he progress of the intricate design and usage or colour. Included in his museum are puppets from around the world. He helps to promote local tourism by also showing and abundant amount of tools used in farming. Suchart also promotes media and the fights against AIDS and Malaria. 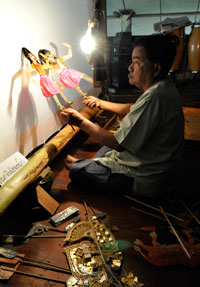 Suchart Subsin was born on July 2, 1938, in the Tha Sala District He finished his primary school and began studying and developing his interest in shadow puppets or nang thalung.

He learned the process of making the puppets as as performing. At the age of 16, he used his knowledge and began the performance of the characters he had developed. Suchart soon became well known as a shadow puppet performer and maker, especially in the South.

He had as well many opportunities to travel abroad show his art and learn from other cultures. He has a professional skill in his art and is considered to be the best in Thailand. He has obtained many awards for his extraordinary abilities.

In 1985, Mr. Subsin had the opportunity to perform for His Majesty King Bhumibol Adulyadej at Thaksin Ratchantvesha Palace. He was gratefully thanked many times by His Majesty the King for helping such an ancient folk art alive in modern times. 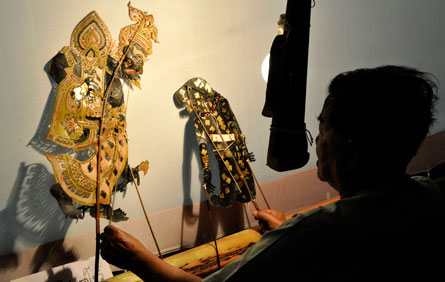 Suchart has passed down the art of shadow puppet making to his children and the people of Southern Thailand with spirit and pride.

Inspired by His Majesty the King words, Mr. Subsin has opened his home and museum at 110/18 Si Thammasok, Nakhon Si Thammarat to the many people who are interested in puppetry in the hope that the entertaining nang talung is not lost. 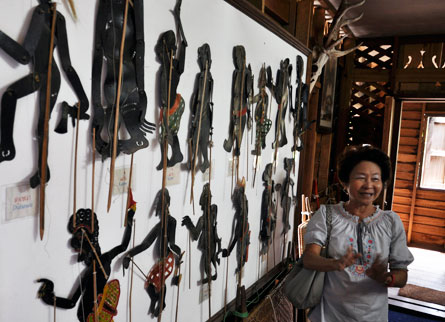 Ban Nang Talung is about a ten minute walk from Wat Phra Mahathat. It is a unique and beautiful museum dedicated to the history of shadow puppetry and contains shadow puppets from throughout the world. The museum and residence of Mr Subsin are in the same compound. When you enter the museum compound, there is a small one-storey building displaying how the figures are made, a souvenir shop and a donation box. The museum is composed of two buildings. The first one is a wooden house on stilts. The upper floor displays shadow figures and a rare 200-year-old figure as well as those from neighboring countries, e.g., China, India, Indonesia, Malaysia and Turkey.

In addition to shadow play figures, Mr. Suchart also collects iron tools and knives. Wherever he performs, he asks local people about interesting antiques in their areas and buys them if the objects are to his interest.

In the Museum you will discover:

– Muslim drum made from water buffalo skin and a sugar plum tree. Water buffalo skin is very hard. Muslim people used the drum to call people to meetings or prayer times because in the past there was no sound system. 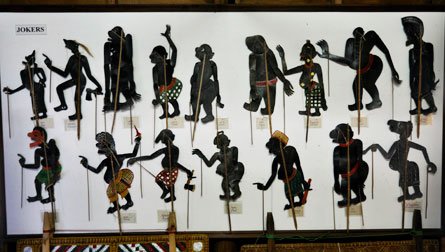 – Musical instruments used in shadow puppet performances. There are 7 different instruments in total.

– A lantern which was used in the past before there was electricity in order to create the shadows on the screen.

– Over 200 years old puppets, believed to be from Nakhon Si Thammarat. All of these puppets are of giants.

– Puppets made during World War II. The puppets are small as the screen was also small. This was because the puppet master had to be careful of bombing planes and could not use a sound system.

– Pramotai puppets from Isaan, the North East of Thailand. These were popular during the reign of King Rama VI. The shows were used for teaching and entertainment, and the children really liked it. Isaan people call shadow puppets “pramotai”. Pramotai puppets began after the funeral of King Rama V and spread throughout Isaan. 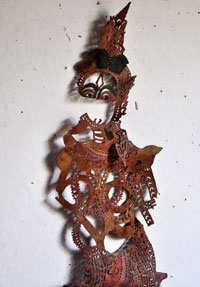 – Puppets from central Thailand. We don’t know when the shadow plays began, but they were modeled on puppets from the south during the reigns of King Rama IV and V in the Rattanakosin Kingdom. In the central region they like to play the Rammakien story. The puppets are made from cow skins.

The second building is also a wooden stilted house displaying household utensils, tools, wickerwork and knives. The exhibitions are not accompanied by any descriptions. This is done intentionally because the owner wants visitors to ask him or other family members personally so that they can give more detailed explanations.  Furthermore, the play  is performed  at a small theater for visitors with Mr. Suchart doing the voice. The performance is sprinkled with contemporary anecdotes and humor for viewers to enjoy. 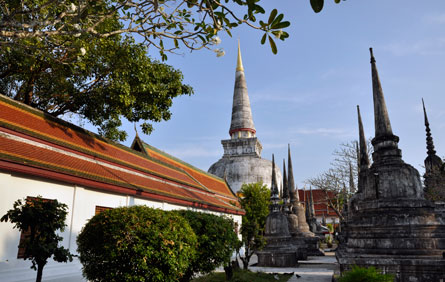 The management of the museum is family-oriented with Mr. Wathi, his son and an art and culture lecturer, coordinating and managing the museum. In terms of public relations, it is quite successful because the museum attracts foreign visitors. Therefore, public relations brochures of the museum are written in English to facilitate their better understanding of the shadow play.

Suchart Subsin, a famous master shadow puppeteer, said “I’m worried the shadow play will disappear from our culture. The stories of my shadow play are various and contemporary to attract people and preserve the art. The play will be performed differently, depending on my target audience.”

Please visit Mr Suchart Subsin and discover the history of a unique art form at his museum located at: 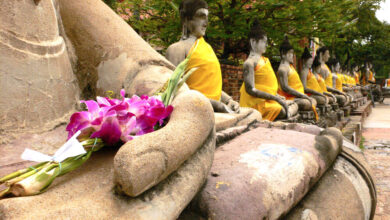